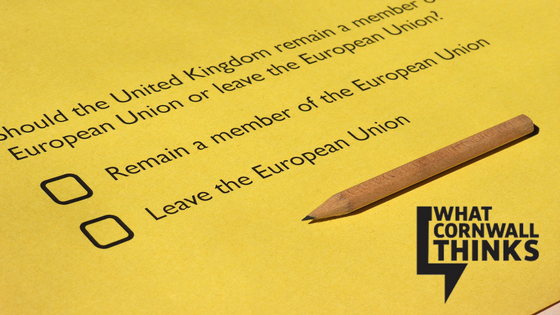 Do the people of Cornwall think that Brexit will be good for the county?

The majority of the electorate in Cornwall voted for the UK to leave the EU.  Overall, 56.5% voted to leave and only 43.5% voted to remain.

PFA Research has been busy carrying out a range of Brexit research over the last 9 months or so.  This includes how Brexit is likely to impact upon Cornwall; how voters feel about the result now that they have had time for reflection; how businesses might seek to benefit from it and more.

There were a diverse range of reasons for wishing to leave the EU including concerns over local fishing; the perception that it will aid the UK economy as-a-whole; a desire to reduce ‘red tape’ or bureaucracy and more.  It is apparent that voters in Cornwall were not motivated only by a desire to reduce immigration, as has sometimes been claimed within the media.

Similarly, there were a wide range of reasons for wishing to remain in the EU.  These were not solely focused around the claim that Cornwall is a net beneficiary from EU funding.  Reasons include the perception that there are trade benefits associated with membership; a belief that the EU has helped to encourage peace and stability in Europe; a desire to continue to benefit from freedom of movement across member states and more besides.

The team at PFA Research were particularly interested to find out the Economist and the Guardian have reported several instances of leave voters wishing that they had voted to remain.  As a result, the recent ‘What Cornwall Thinks’ survey also asked respondents whether they voted for Brexit and also, whether they wish that the outcome was different now.

Commonly cited reasons for perceiving that the impact of Brexit will be worse than expected include a belief that the UK will struggle to negotiate a good Brexit deal with the EU; fears of a Europe-wide recession; concerns relating to house prices and mortgage rates; and more.

Reasons for perceiving that Brexit will have a better than anticipated impact include the perception that the currency markets have recovered relatively quickly from an uncertain referendum outcome; the belief that the Government is already seeking to reduce the impact of bureaucracy or ‘red tape’ upon business activity; and also, a feeling that businesses within the UK will be able to continue to trade at current levels following the UK’s eventual departure from the EU.

In the meantime, please do get in touch with Robert Salvoni if you have any questions about PFA Research’s ‘What Cornwall Thinks’ survey or its Brexit findings.