Into 2018 – the Cornwall Business Market Summary

Compared to the UK as a whole the growth rate of businesses in Cornwall and the Isles of Scilly is therefore just a third of UK overall.

London, which has the largest number of VAT and/or PAYE-based businesses and traditionally has shown the largest growth among all regions was ‘only’ fourth in 2016-17 with a growth rate of 6.0% (previously 7.2% in 2015-2016).

Table 1: Number of UK VAT and/or PAYE based enterprises by location, 2015 to 2017 (Count given to the nearest thousand)

In 2017, agriculture, forestry & fishing remains the largest industry group in Cornwall and Scilly with 17.9% of all registered businesses.  Construction (13.4%) is still next largest, followed by professional, scientific and technical businesses (10.1%) and accommodation and food services (9.8%). 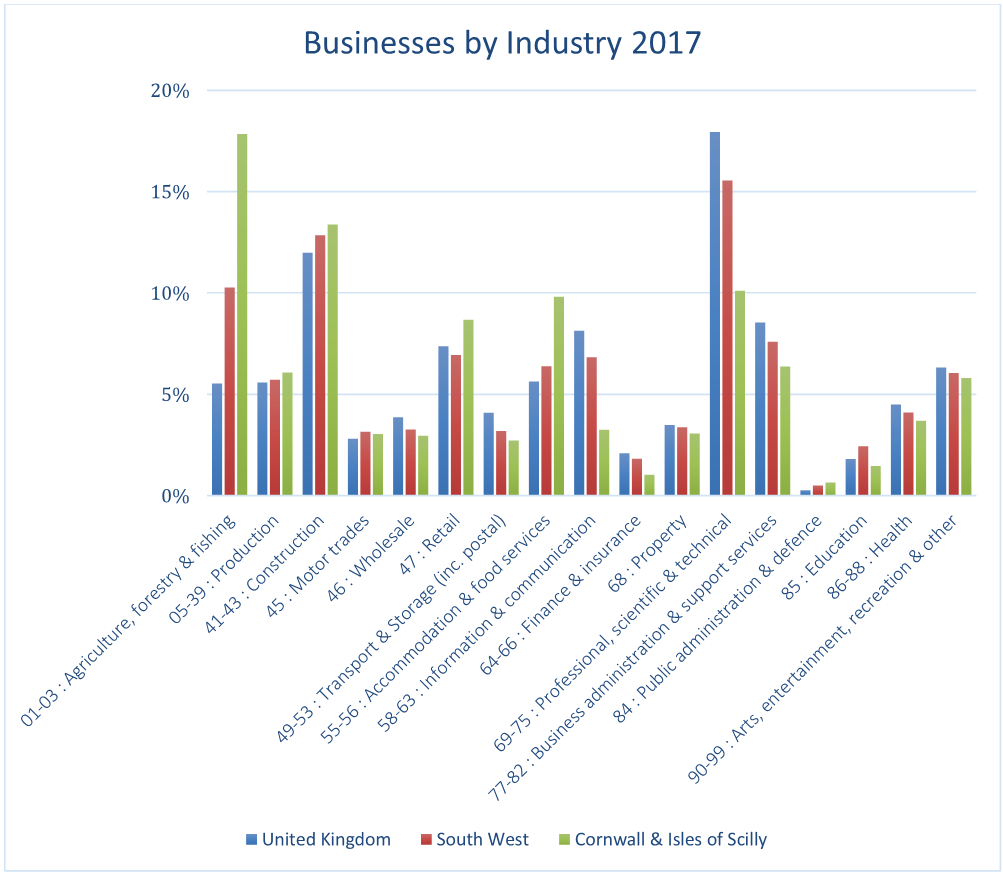 The ONS 2017 data shows that Cornwall & Isles of Scilly still has a higher proportion of businesses in the lowest turnover band (less than £50,000), with 20.1% compared to the UK average of 17.2%.  It also still has fewer bigger businesses with a turnover of £1m and over – 6.7% (down from 7.5%) of businesses in Cornwall & Isles of Scilly operate at the highest turnover levels compared to 8.9% (down from 9.2%) across the UK as a whole. 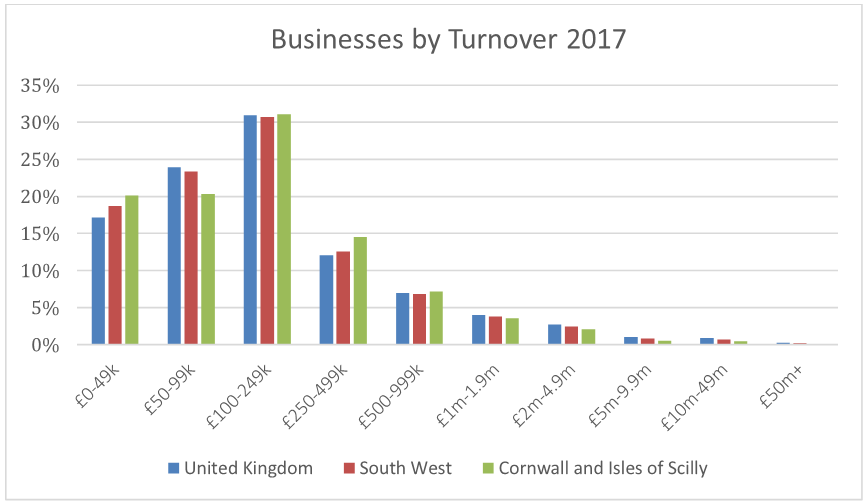 In terms of employment size, the 2017 stats are similar to previous years; Cornwall & Scilly is still representative of the UK average, except:

Also, there is still no conclusive evidence to suggest that Cornwall and Isles of Scilly has a significantly higher proportion of micro entities than the UK as a whole[2]: 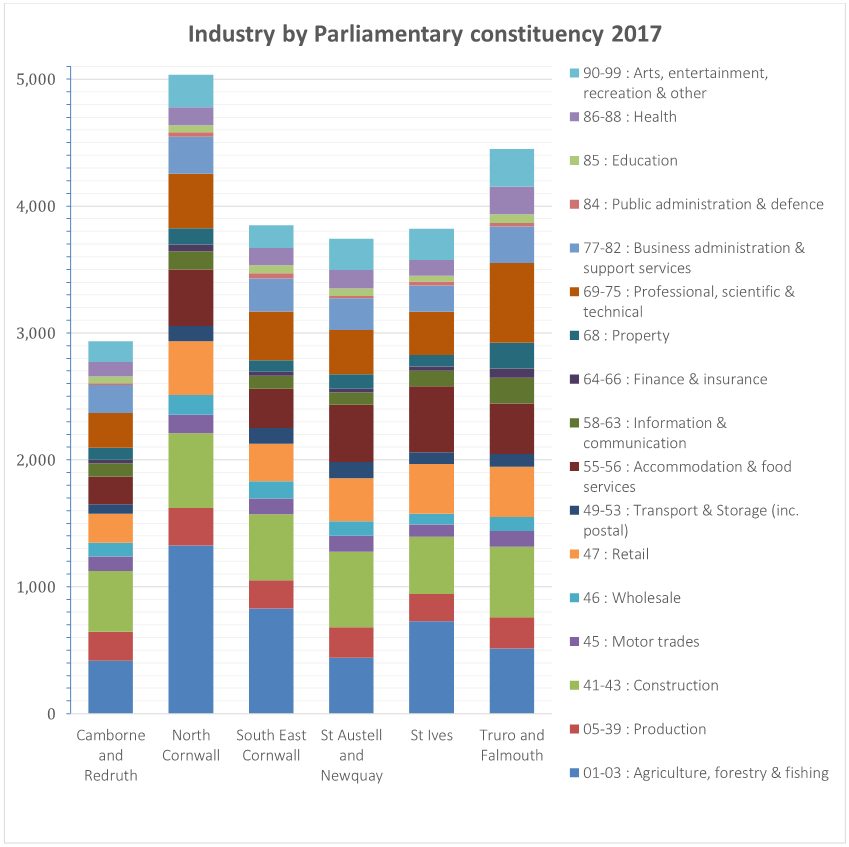 In terms of business size – about three quarters of businesses in Cornwall have less than 5 employees. Businesses with 5-9 employees represent the second largest group with close to or just over 14% across Cornwall. North Cornwall has the highest proportion of businesses (22.8%) within the lowest turnover band of less than £50,000.

PFA Research conducts the Quarterly Economic Survey (QES) in Cornwall on behalf of Cornwall Chamber and the British Chambers of Commerce.  By analysing the results across the last five years, we see a more longitudinal picture and the trends over time…

As an indicator of business confidence over the long term, the trend shows a positive net increase with balances increasing since the third quarter of 2016. 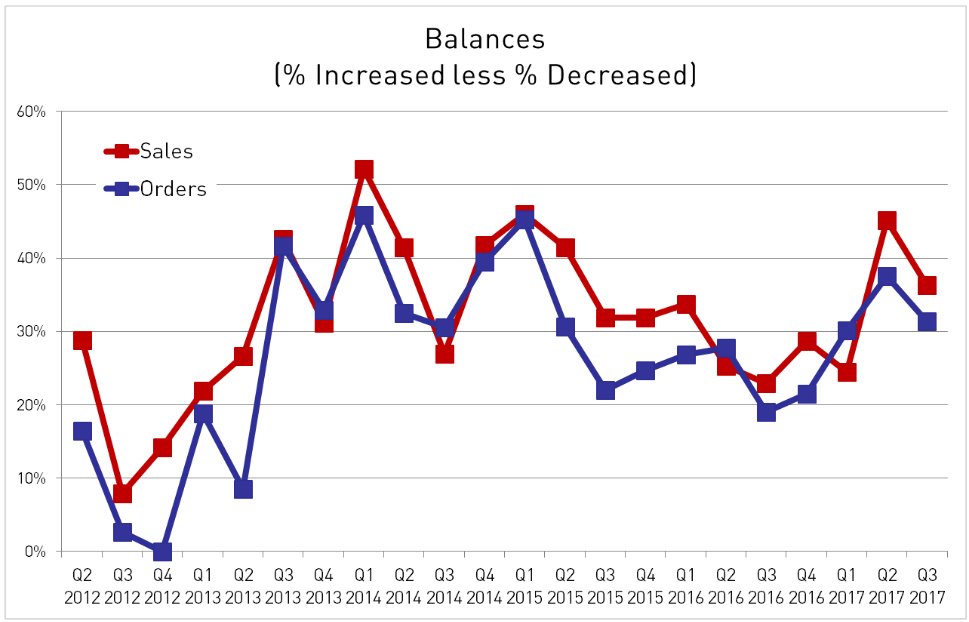 About a quarter of businesses who contribute to Cornwall Chamber’s QES are exporters. Sales and advanced orders have increased over 12 months from 2016 Q3 only to decline again in the third quarter of 2017. 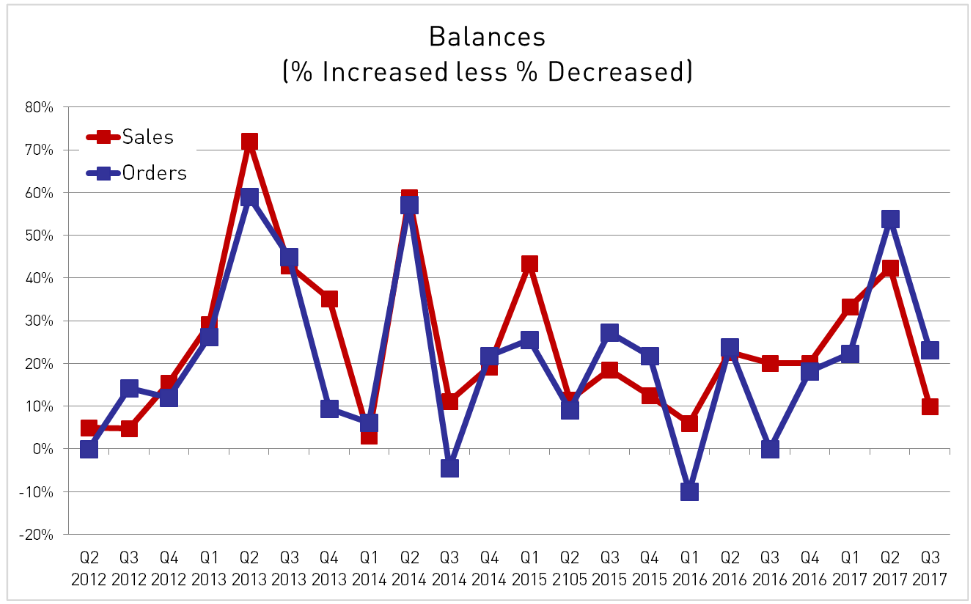 Cashflow performance tends to rise after fall and fall after rise from quarter to quarter. However, there was a subsequent fall in Q1 this year, the first time in five years, although overall cashflow remains fairly strong over where it was just a few years ago. 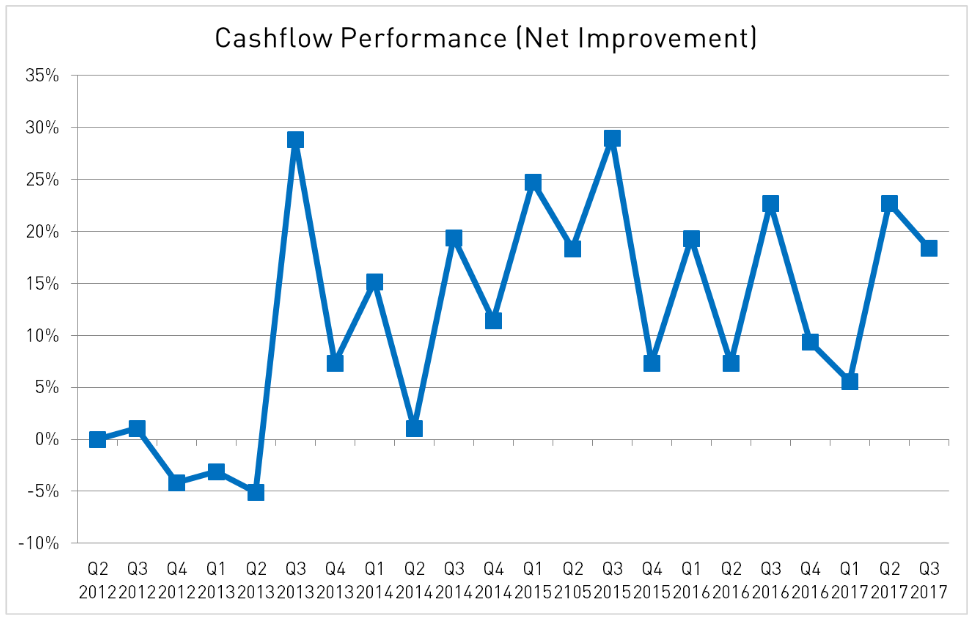 There has been a steady increase in the balances of plans for investment in plant, machinery and equipment and training since Q3 of 2016, suggesting a more positive attitude in what are still uncertain times for many. 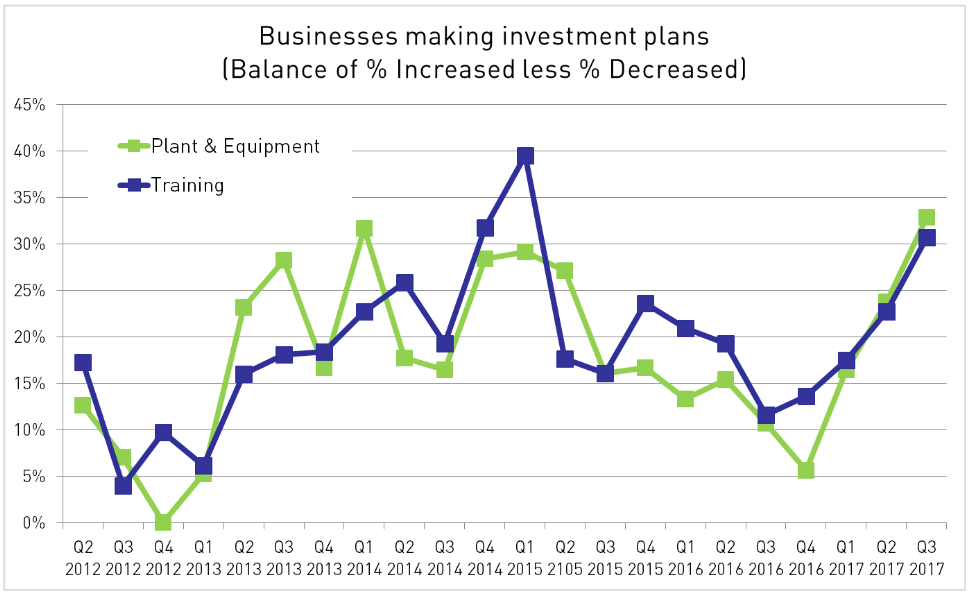 This ‘snapshot’ of business confidence at quarterly intervals over the last five years shows a more positive expectation of turnover rising though the gap between that and confidence in profitability increasing has widened. 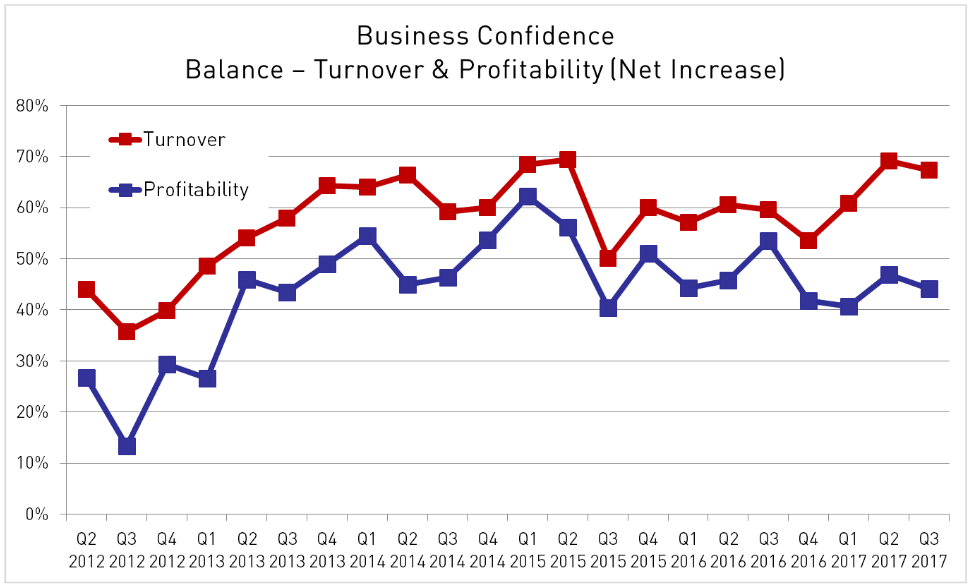 Aligned with business confidence increasing through 2017, reports of increases in workforce and forecasts have also been positive through 2017, with only a dip in the planned change over this last quarter. 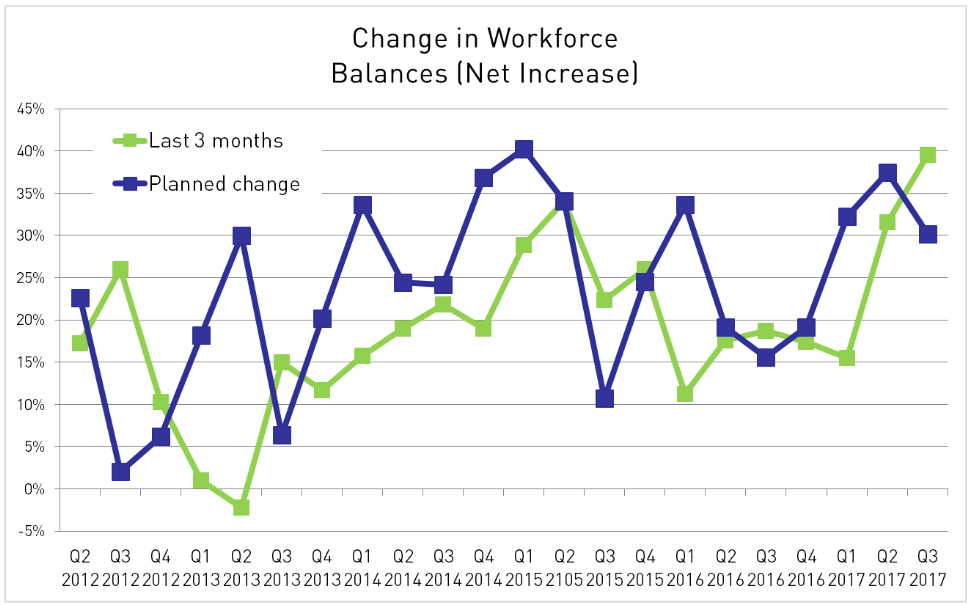 After a fairly stable period in terms of the types of positions looking to be filled, 2017 has seen an increase in the proportion of businesses trying to recruit (now over 50%, last seen at that level four years ago) and the need for filling full time vacancies rather than part-time. 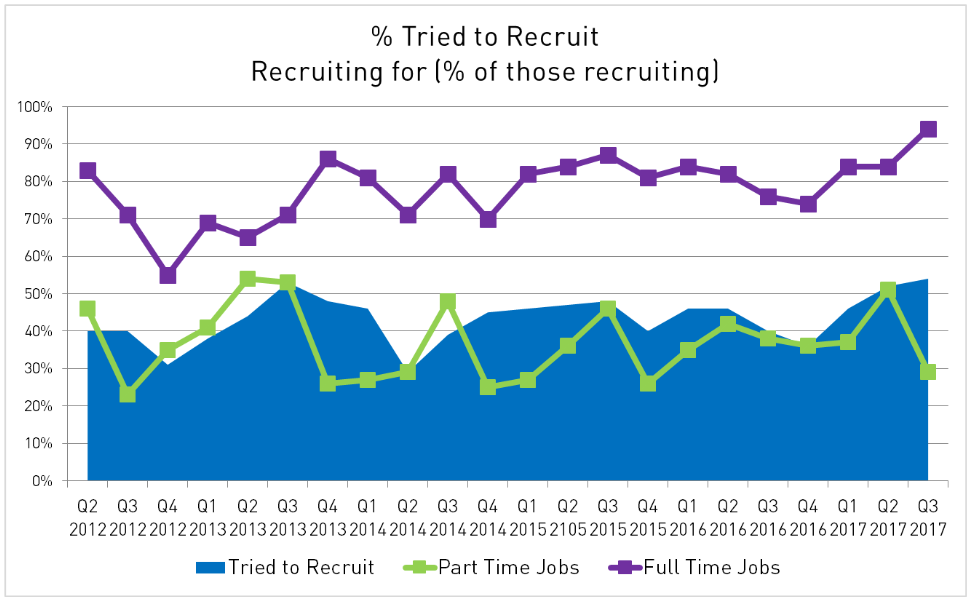 Cornish businesses appear to be responding positively to what is still an uncertain time for many as Brexit approaches.

‘Confidence’ is relatively high in terms of expected sales (turnover) but the gap between the balance scores of turnover and profitability has widened which is unlikely to be sustainable. Businesses have increased their workforces and more businesses are trying to recruit staff and increasingly into full-time roles. Supporting this, the proportion of businesses saying they are increasing investments into capital projects and also staff training (skills) have risen steadily over the last 12 months. Cashflow performance remains fairly positive but it will be interesting to see if the rate starts to track negatively after the obvious increase in investments this year.

Growth in number of businesses continues in Cornwall (at 1.5%), albeit at half the rate of the South West as a whole and a third of the UK rate. The agricultural industry is still the largest industry in Cornwall (though evidently in decline) but the professional, scientific and technical sector continues to emerge, especially in the Truro & Falmouth areas) and now exceeds the number in the accommodation and food sector.

[1] Figures for Cornwall & Isles of Scilly alone are not available.

[2] It is not possible to cross analyse ONS statistics at a business level. The strict definition as to what constitutes a ‘micro-entity’ is where at least two of the following criteria are met:

This article was produced for and published in the December 2017/January 2018 edition of Business Cornwall magazine.