Peak energy shouldn’t be confused with energy depletion.  The term ‘peak energy’ is used to describe the moment at which the demand for energy production reaches its highest ever point and subsequently declines.  McKinsey and Co recently reported that the world has probably already reached peak coal and is also, likely to reach peak oil within 5 years!

This is happening at least partly because advances in technology have led to vast increases in energy efficiency.  It can also be attributed to slower population growth, lower economic growth and an increase in demand for services, as opposed to goods.  As a result, overall demand for energy production is likely to peak in 2025.

Research has shown that a variety of social and environmental factors impact upon both the adoption of renewable energy technology and overall energy efficiency.

PFA Research takes a look at the social and environmental factors that affect the extent to which Cornwall is likely to embrace renewables and reduce energy consumption enough to reach peak renewable energy by 2025.

The economic argument for renewable energy technology in Cornwall

There has long been a moral argument for adopting renewable energy.  We often hear of the environmental and social benefits.  However, it could finally be argued that there is an economic case for embracing renewable energy technology. 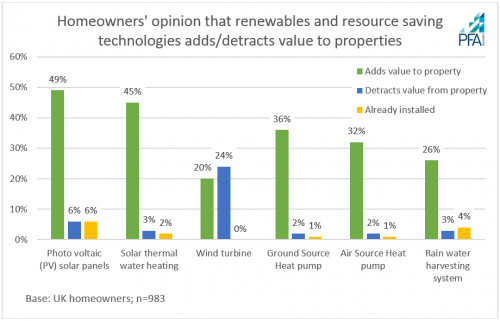 Back in 2015, PFA Research also found that the most popular reason for installing renewable energy technology was to save money on energy bills.  Overall, 81% of Cornish homeowners said that this was their main motivation for installation.

Not all renewables are perceived equally…

PFA Research’s 2017 survey shows that some renewables are perceived to be better investments than others!

Solar PV is very popular amongst respondents. Overall, 6.3% have already installed PV solar panels and 12.5% plan to install them in the future, which suggests sizeable potential for market growth.  Correspondingly 49% perceive that they add value to a property.  This is good news for solar energy equipment suppliers and fitters in Cornwall, as they have been suffering as a result of government cuts to subsidies, including the Feed in Tariff, Renewables Obligation and Contracts For Difference.

In contrast, wind turbines continue to polarise public opinion.  PFA Research’s 2017 survey shows that only 20% of respondents believe that a wind turbine adds value to a property and that 24% believe that it detracts from its value.  This will not surprise the residents of North Cornwall following DCLG’s Sajid Javid’s recent decision to block the plans for a £30 million Big Field wind farm in the area.

Many local residents were concerned about damage to house prices resultant from noise and visual impact of a site located in an area of outstanding natural beauty.  This meant that they were not in support of the scheme despite promises from the developer that it would generate enough energy to supply 22,000 homes, in addition to providing a £63,250 community fund and discounted energy to all nearby households.

Who are the cheerleaders of renewable energy?

It is often the case that those that are most passionate about a product or service are not necessarily those with the means to purchase it!  This can pose a challenge for innovative businesses seeking to sell new technologies to a wider market.

For instance, evidence shows that the cheerleaders of renewable energy are often those that are yet to purchase a home or acquire significant assets.  Students and younger people are often advocates of renewable energy; 43 British Universities divested from fossil fuels in 2016 following student-led campaigning.  PFA Research’s national research findings also support this, as 43% of those that wish to install solar PV are aged 34 years or under, but only 2.6% of those that have already purchased solar PV fall within this age category.

Those marketing or selling renewable energy technology may be interested to know that PFA Research’s national renewables survey shows that solar PV customers are more likely to be older and male.  The results show that those aged between 45 and 54 years are most likely to have installed solar PV, followed by those over the age of 54 years.

The average household income of those opting to install solar PV falls between £45,000 and £64,000.  Overall, 21% of those with solar PV fall into this category.  An additional 19.4% earn between £25,000 and £44,999 per year.  Solar PV adopters are most likely to report that they are company directors, senior managers or similar.  Interestingly, 17% of those with solar PV are retired and just over 14% work within the public sector.

Rainwater harvesting is the second most commonly used form of renewable energy technology.  A total of 4% of respondents to PFA’s Research’s 2017 renewables survey already has a rainwater harvesting system and an additional 7% wishes to install one.  Local organisations, including the Eden Project and Heartlands have used this technology for quite some time, but it is being increasingly adopted by other business and residential properties.

In addition to this, Cornwall’s potential to lead the way in a wide range of renewable energy technologies is demonstrated by an ongoing crowdfunding scheme named Abundance that hopes to use the county’s ‘abundance’ of granite to produce a fifth of the country’s power.

Cornwall was once known for its onshore wind capacity.  There have been wind turbines at Delabole for over 25 years.  Despite this, many local residents do not view this technology positively.  Coupled with a national government that is not an advocate for onshore wind technology, it seems likely that this will play a lesser role in the move towards peak renewable energy in Cornwall.

Only 0.3% of PFA Research’s survey respondents have installed a wind turbine and just 2% would like to install one in the future, which means that those hoping that onshore wind will lead the way towards peak renewable energy are likely to be disappointed.

In conclusion, the research clearly shows that both Cornwall and the UK as a whole are moving towards peak energy.  Growth in fossil fuel consumption is falling.  Furthermore, advances in technology and stricter government policy across the globe are gradually helping us to use less energy overall, whether renewable or fossil-based.

It may be increasingly difficult for Cornwall to lead the way in onshore wind, but the county does benefit from an enabling local environment for the adoption of other forms of renewable energy technology.  This includes an engaged local community that has embraced renewable energy technology by installing solar PV and showing a keen interest in technology, such as solar thermal water heating, ground and air source heat pumps and rainwater harvesting.

This unique combination of factors means that Cornwall is likely to play a leading role in the move towards reaching peak renewable energy by 2025.  Therefore, we look forward to seeing what the next decade or so will bring…

This article was produced for and published in the September 2017 edition of Business Cornwall magazine.