The start of a new year is always a time to reflect, albeit only a moment in time in the business calendar. Here we take a sideways look at some of the more interesting facts and figures concerning the state of business finances, confidence and performance, both locally and against the national context.

The latest figures from Cornwall Chamber’s Quarterly Economic Survey (QES), published for Q4 2016, show a cautiousness creeping into the Business Confidence statistics with most indices lower than the same period in 2015: 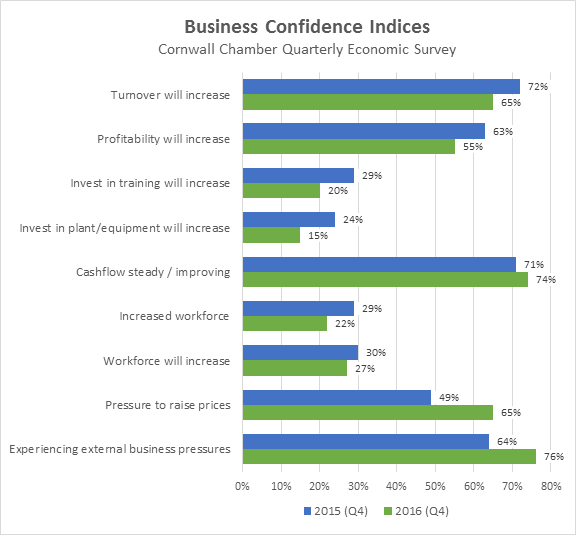 The results for Cornwall reflect the wider picture across the nation as a whole, as compiled by the British Chambers of Commerce from a total response of 7,200 firms. It reports the forward looking indicators in Q4 to be showing a gradual return to similar levels seen prior to the EU referendum, with confidence and investment improving for both manufacturing and services.  It also notes the percentage balance of manufacturers expecting the prices of their goods/products to increase over the first three months of 2017 as standing at its highest level on record (52%).

These figures align with findings from other national surveys. The Lloyds Bank Business in Britain Report January 2016, which presents findings from a survey of 1,500 UK businesses tracking their overall balance of opinion on a range of important performance and confidence measures, found that economic activity is stabalising, British businesses are relatively upbeat on their outlook, and prospects for profits, investment and hiring remain in line with a maturing recovery and consistent with solid economic growth. As per Cornwall’s QES indices, the Lloyds index of business confidence notes a dip to 38% from a steady 43% in previous surveys.

The Confederation of British Industry (CBI) described 2016 as “actually a decent year for the UK economy”, with GDP growth remaining resilient after the referendum, and set to be in line with or even a little above its own forecast of 2 per cent. It has a softer forecast of 1.3 per cent for 2017. The CBI’s latest Growth Indicator survey shows economic growth across the private sector remained steady at 9% in the three months to November 2016.  The survey of 715 respondents showed that performance in the UK’s manufacturing sector was slow, while growth in business and professional services in the country remained flat. On the upside, however, the CBI survey reports consumer-facing sectors to have witnessed good growth amid a pick-up in consumer services and retail business. This concurs somewhat with the Lloyds report, which also shows the Retail & Wholesale to be the sector bucking the trend in terms of sales growth and advanced orders, as well as overall business confidence.

In a further CBI survey of 818 firms, which was supported by Deloitte and Hays, around 70% said they would increase or maintain their spending on innovation and just 7% said they would reduce spending. Spending on innovation is widely accepted as a route to generating jobs and economic growth. In Cornwall, the combined annual turnover (2016) of businesses located across the three Cornwall Innovation centres is over £24m with a combined average growth of 143% for long and short term clients.  The CBI survey was conducted as UK firms invested about £21bn on innovation in 2015, which allowed them to develop cutting-edge products and services, attract global investment and expand internationally.

The FSB ‘Voice of Small Business Index’ Q4 2016 reported that “Small business confidence rebounded in the last quarter, but cost pressures are at their highest since early 2014”.

44% of small businesses are operating below capacity. As the report states, declining spare capacity should encourage companies to invest and expand capacity, however, the proportion of small businesses aspiring to grow over 2017 has fallen to about 53% (down from about 60% in Q4 2015, and its high of 65% in Q2 2015). The greatest barrier to growth is the domestic economy at 57%, up from 46% a year ago.

The same trends were seen for profitability, with negative balances of between -7% and -3% of firms reporting growth in gross profits each quarter of 2016.  The FSB report shows that investment intentions ‘remain subdued’ with a net balance of 17% of small businesses intending to increase capital investment over the next quarter compared with the previous quarter – notably up from over 11% for the previous quarter, however still significantly down on the peak of 32% seen in Q2 of 2015.

Operational costs were reported as increasing throughout 2016 to a new net balance of 57% businesses surveyed, its highest for three years. There are many causes of changing costs, with the proportion of businesses citing ‘inputs’ having increased over the year (Q4 2015 to Q4 2016) from 22% to 31% and those citing fuel increasing from 12% to 19%. The most notable drops are labour (the greatest cause of changing costs) falling from about 45% to 41% and rent, from over 20% to 16%. However, in response to the biggest change in business costs the FSB report states: “The inflationary environment for both consumers and businesses is set for a drastic change over the coming months, as the weakness of sterling translates into a significant increase in the price of imported goods and services. About three in ten (28.0%) small businesses this quarter state that the exchange rate is a main cause of cost inflation, up from just 5.4% at the end of 2015.”

As small businesses continue to rebound, through 2015 and the first half of 2016 saw a quarter on quarter decline in the number of company insolvencies in the UK.  However, the latest data available from National Statistics estimates an increase for Q3 2016 (3,633 up from 3,593 a year before).

Last year the availability and affordability of finance was reported by the FSB survey as on the up. The latest report this year reports the level of successful credit applications declining, albeit they’re now at the same level as this time last year, having seen success rates at a high 70% through 2016 (for the 14% of firms that apply).

The report of credit availability and affordability worsening for small businesses in the final quarter of 2016 aligns with reports of declining perceptions of credit affordability and availability, which in turn aligns with the decline in aspirations for growth, a subdued climate for investment intentions and the inflationary environment overall.

What a difference a year makes. The first quarter statistics for 2017 will be fascinating, a good six months after the EU Referendum result and Prime Minister May’s speech on 17th January. By which time we might just have an inkling of the way things are going to go, whether any blips in the latest trend lines are just that or turn out to be early signs of more challenging times ahead.

This article was produced for and published in the February 2017 edition of Business Cornwall magazine.