Summary of the Cornwall Business Market 2016 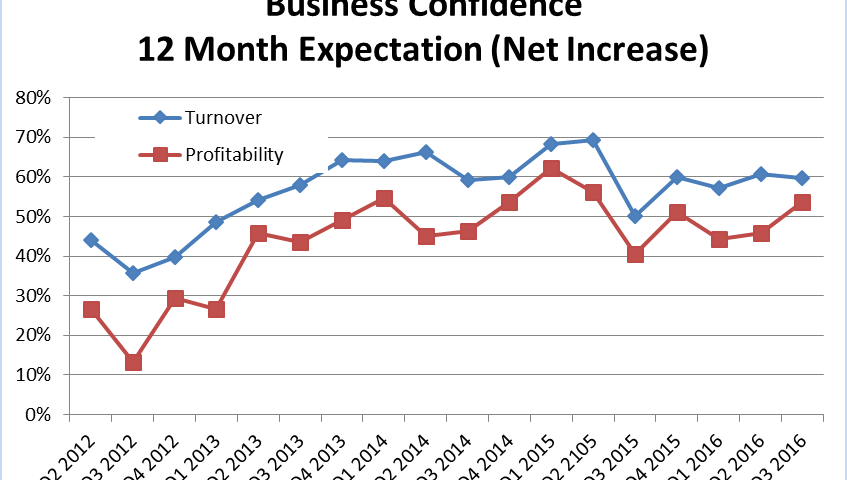 Table 1: Number of UK VAT and/or PAYE based enterprises by location, 2014 to 2016 (Count given to the nearest thousand)

In 2016, agriculture, forestry & fishing remains the largest industry group in Cornwall and Scilly with 18% of all registered businesses.  Construction (13%) is still next largest, with accommodation and food services as well as professional, scientific and technical businesses sharing third place with both 10%.

The growth in professional, scientific and technical businesses is following the national trend where this is the largest industry group, with 18% of all registered businesses.  This may of course be down to the significant focus and investment in Cornwall and Scilly in such specialist knowledge based industries and at the Cornwall Innovation Centres. 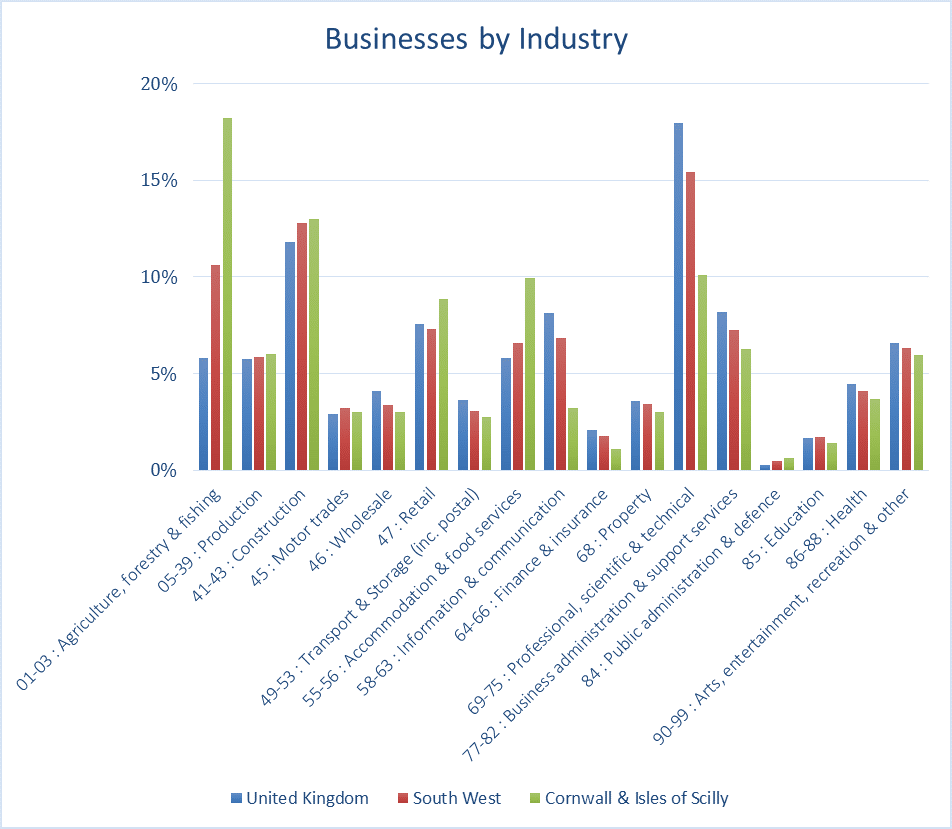 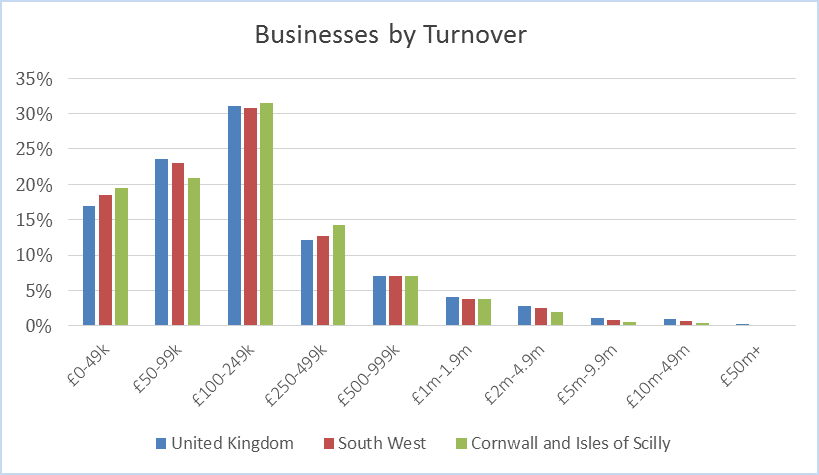 In terms of employment size, the 2016 stats are similar to 2015; Cornwall & Scilly is still representative of the UK average, except:

Also, there is still no conclusive evidence to suggest that Cornwall and Isles of Scilly has a higher proportion of micro entities than the UK as a whole[2]: 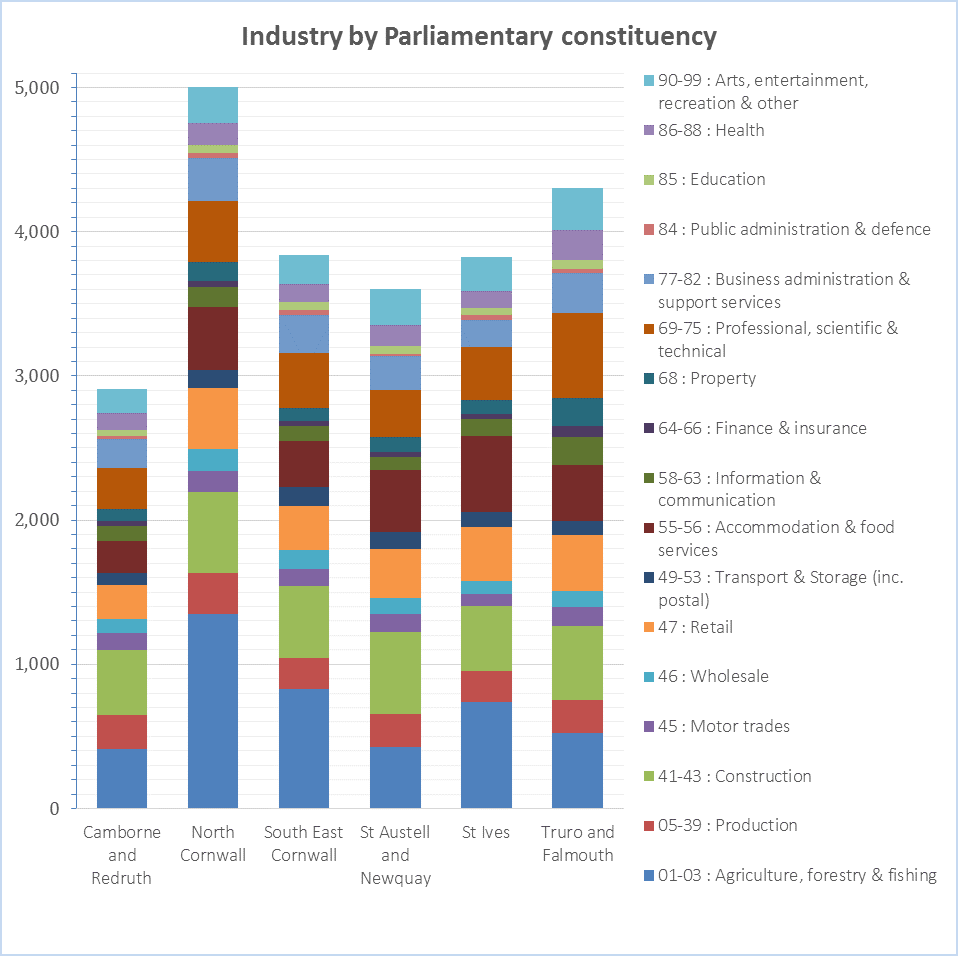 PFA Research conducts the Quarterly Economic Survey (QES) in Cornwall on behalf of Cornwall Chamber and the British Chambers of Commerce.  By analysing the results across the last four years, we see a more longitudinal picture and the trends over time… 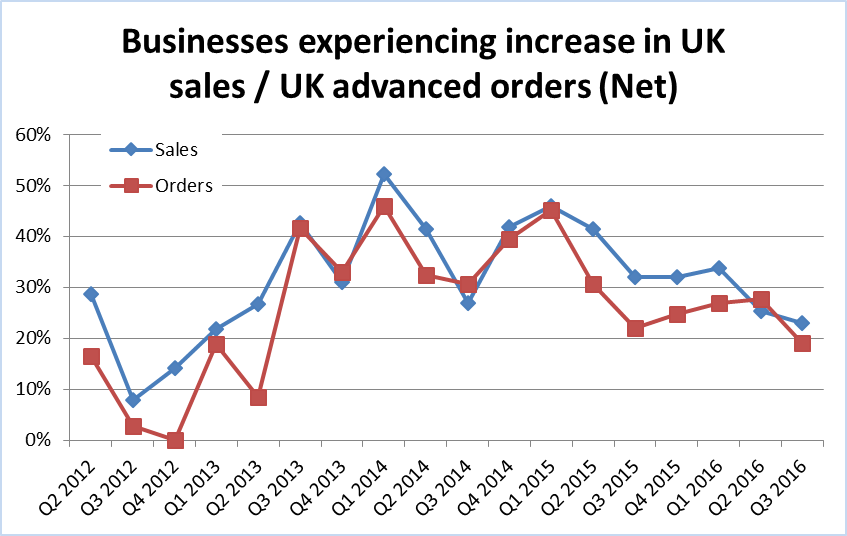 As an indicator of business confidence over the long term, the trend still shows a positive net increase however the balances have been declining slightly throughout 2016.

Just over a quarter of businesses who contribute to Cornwall Chamber’s QES are exporters. At the beginning of 2016 the net increase for this group took a large dip and reached negative growth on advanced orders with -10%. By Q2 the net increase went back to positive but after that started to decline again to the point where it has reached 0% growth by Q3 2016. 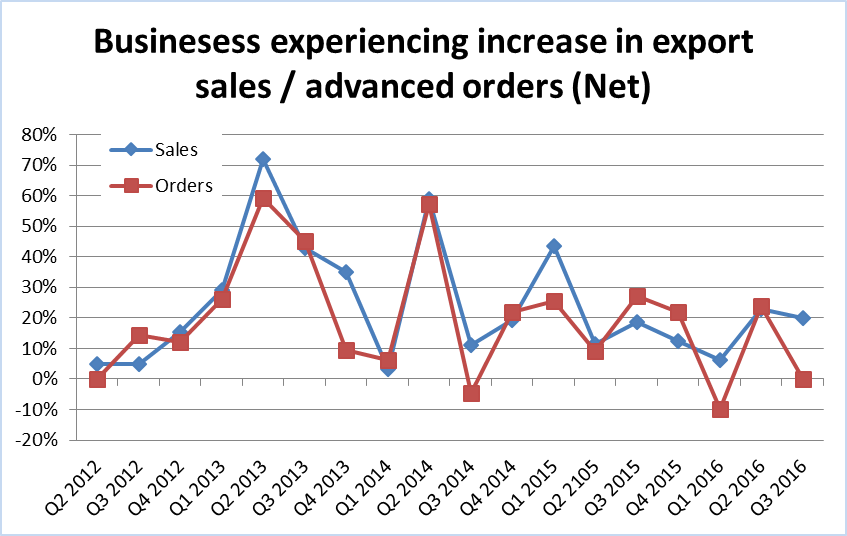 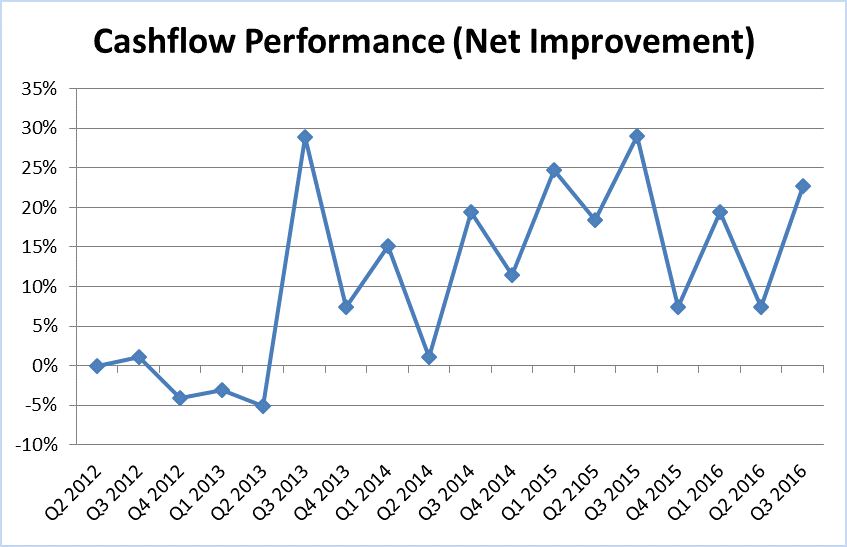 Businesses are still making investment plans for plant, machinery and equipment, and training however not at the same level as previous years. The numbers have gone down in particular in Q3 2016 which could be caused by a more apprehensive attitude in more uncertain times: 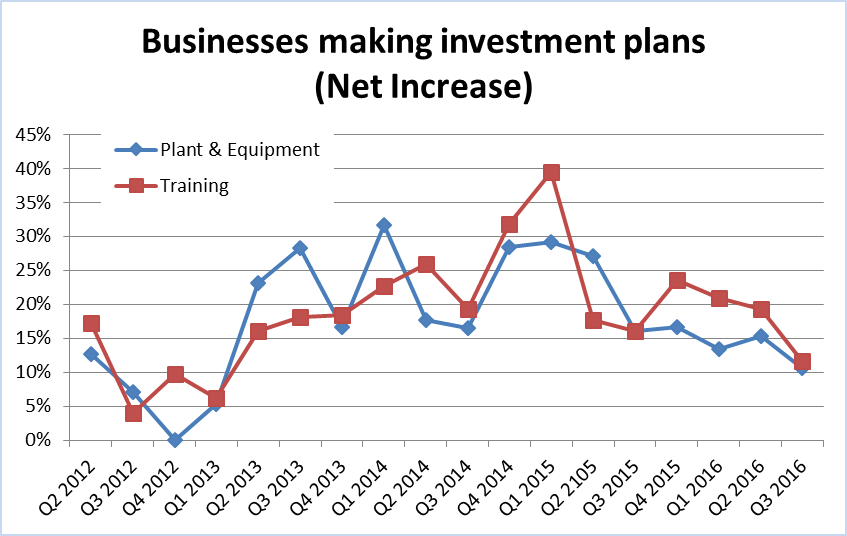 This ‘snapshot’ of business confidence at quarterly intervals over the last four years shows a steady, slowly rising confidence level over the last year compared to the noticeable decline seen in Q3 of 2015: 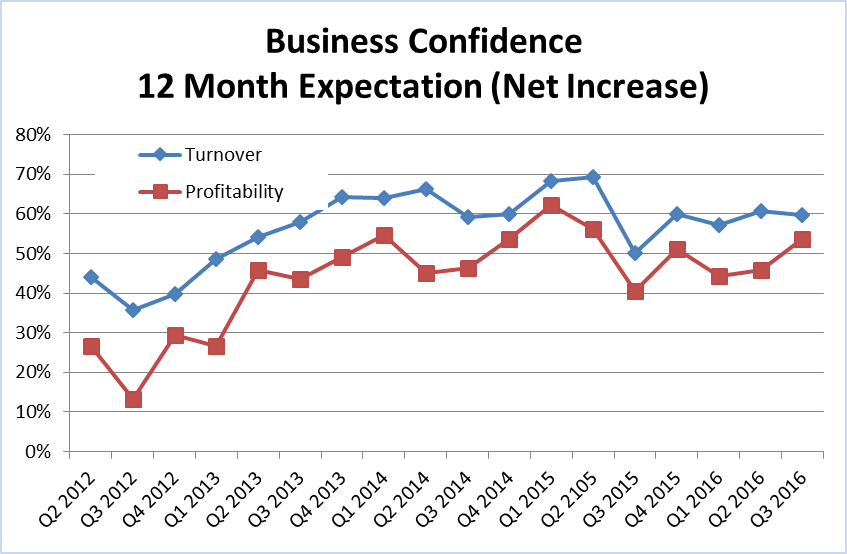 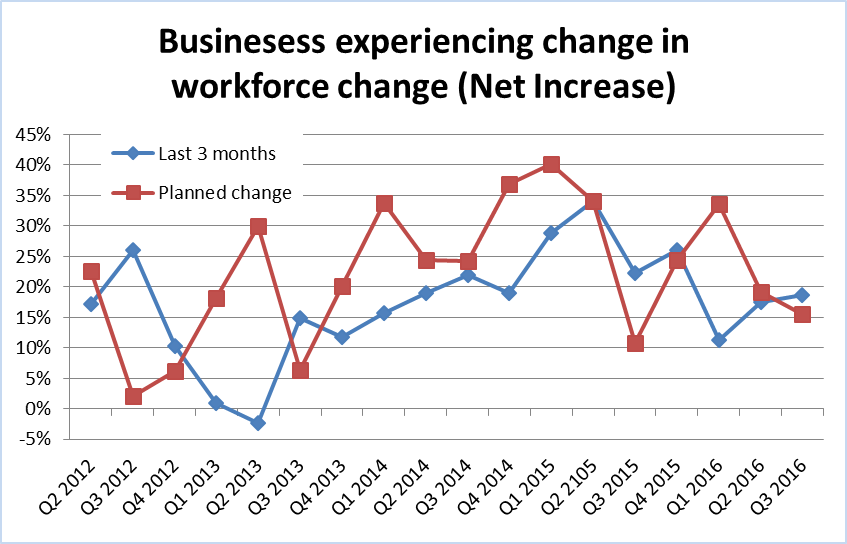 The types of positions looking to be filled remain fairly stable. When taking a look at the last three years the seasonality trend is apparent, where recruitment for part-time jobs increases by Q3 followed by a similar decrease in part-time recruitments for Q4: 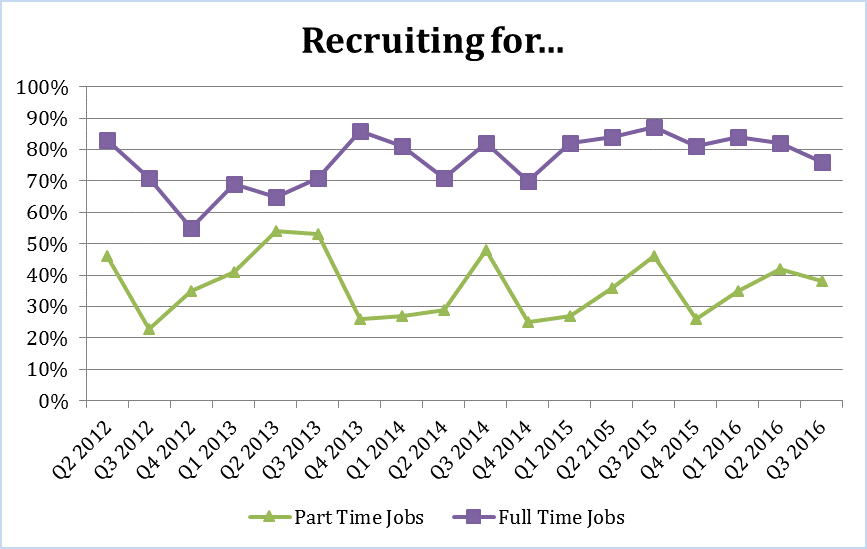 Growth in businesses in Cornwall continues but at a relatively low rate compared to a couple of years ago. However it is comforting to see that the growth rate hasn’t gone down since 2015 compared to the radical decrease experienced from 2014-2015. The agricultural industry is still the largest industry in Cornwall but the professional, scientific and technical sector continues to emerge and is now matching levels of the accommodation and food sector, together representing the third largest sectors in Cornwall.

Cashflow performance has gone down since its Q3 peak in 2015 but overall business confidence has been rising slowly but steadily. However the plans for future investments and recruitment have been decreasing especially since Q2 2016. This might be caused by a more apprehensive and conservative approach due to the outcome of the EU referendum back in June 23rd this year

The success of new initiatives must continue to be for growth and attraction of bigger businesses to Cornwall to encourage more and higher value employment and investment in skills and training.

[1] Figures for Cornwall & Isles of Scilly alone are not available.

[2] It is not possible to cross analyse ONS statistics at a business level. The strict definition as to what constitutes a ‘micro-entity’ is where at least two of the following criteria are met: