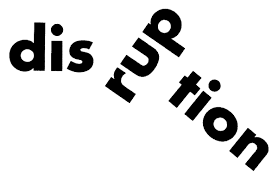 As far as disruptive technologies go, mobile must rate as the benchmark. The advance of digital mobile has sufficiently altered our engagement with content delivery that across society the previous King of the Hill – television – is slowly being deposed in favour of its younger, smaller, transportable and infinitely more engaging brother, mobile. The evolution of mobile devices from house brick sized devices to miniature and almost back again (see phablets) and the astounding range of services that have found their genesis or rapidly expanded in the medium is astounding, with many of these se
rvices acting as disruptive innovative platforms their own right: What’sApp/Snapchat/KiK, Facetime/Skype, Near Field Communication (NFC) and Uber are all up for consideration.

But more than the disruptive nature of the medium itself, mobile has transformed entire industries by enabling communications as never seen before. Today we demand more, faster and with more personal connections, even if that is with someone thousands of miles away. Mobile has transformed our engagement with advertising, purchasing, content, gaming – you name it, and I am confident mobile has graced it somehow.

Modifying consumer behaviour to consistently derive enjoyment from mobile engagement is a mainstay of this transformation. Consider advertising on television: a plethora of flashing lights, shouting and coercion packed into a two-to-four minute slot, but due to inertia we sit through, or ignore and make tea. Engagement levels are ‘high’ in the sense we are in the room, but low in consumer feedback and enjoyment. Mobile adverts can be tailored, are significantly shorter, direct and due to the personal device playback, establish a personal connection with the consumer.

The transition to a society where mobile engagement is king has provided researchers in all walks of life the opportunity to pursue their participants to an increasingly personalised level. Aside from the implications of big data being consistently collected via the numerous applications, browsers and social media sources we utilise, the validation of direct consumer insight on a very personal level has consistently shown that where mobile is involved, there will be valuable information at hand (literally!). The wave of adoption is not just for the younger generations, as many technological waves are headed by the youth market.

With mobile devices usually costing a small fortune the adult markets have fuelled the rise in device usage and in turn, the ability for market researchers to ultimately tap into insight as soon as possible. Research applications combined with paid feedback have led to massive research networks that can be called upon to ‘learn’ about any given research requirement by building quick, impromptu focus groups focusing on single events, quickly disbanded with the satisfaction of guaranteed reward.

Mobile as a first screen or second screen will continue to facilitate insight for the research community. That mobile has overtaken television as the primary screen in several markets only serves to emphasise the potential ROI in mobile research platforms: consumer engagement, behaviours and experiences are consistently under scrutiny as we yearn to understand and predict the next move of our impalpable consumers. As mobile continues to positively disrupt the many inert industrial and commercial sectors resting upon their laurels, the evidence of the power of mobile maintains its momentum, providing compelling engagement and bolstering consumers in mobile participation regardless of previous experience with the medium.